Following on from last week’s visit to the books that kept me going through 2020, this week, again in no particular order of preference, I will share with you the films that have aided me in coping with the year that was.

So, join me now (and as always, feel free to share your thoughts) on the films that helped me through last year.

Back in August of last year, I shared my thoughts with you on Bong Joon Ho’s Oscar-winning triumph, and even now, all those months later after watching this movie, I still think of it. You can check out my original review here – but looking back, even now, this wonderful piece of cinema is in my thoughts, whenever I think about the films I have watched over the last year.

Coming with the expectation from a derth of awards in the cabinet, any movie might struggle to live up to your expectations, and especially one that have garnered the coveted Best Picture award at the Oscars. But, rest assured, this dark, compellingly quirky and gritty South Korean masterpiece garners all the plaudits, and deservedly so.

It’s subtitled, and you should resist the option of dubbing – World Cinema is at its finest when you are hearing the actors speak their own dialect. For me, subtitles bring the film you are watching to another level, the chance to immerse yourself in another place and culture. Hearing bad dubbing for me only works well in 70’s martial arts films – in fact, I couldn’t watch them now without the bad dubbing.

If you have put off watching this brilliant movie, I urge you to give it a try – you will not be disappointed. I may have done this film a disservice in my previous review, as I finished it off by saying that Parasite will make you think about it for many, many days to come. I was wrong, this film will stay with you for many, many years.

I was late to the party with Joker, and it has taken this article to finally get me to share my thoughts on this diversive film. Directed by Todd Phillips (The Hangover Trilogy and War Dogs) and co-written with Scott Silver (8 Mile and The Fighter) this origins tale from 2019 is, quite frankly, as compelling to watch as it is uncomfortable.

It charts the troubled life of Arthur Fleck, brilliantly played by Joaquin Phoenix (Gladiator, Walk the Line, Her) and shows the viewer of how DC Comics most infamous villian, The Joker, eventually came to be.

Working for Ha-Ha’s as a Clown-for-hire, Arthur balances his work with his severe depression, and caring for his ailing mother (Frances Conroy). It’s 1981 in Gotham city and widespread unemployment has left the poverty-stricken streets full of crime and desperation.

Harbouring desires to become a stand-up comedian, Arthur tries to struggle through life by giving joy to others, when in reality, his own life is joyless and full of turmoil.

Being an origins story, the well-documented future for Gotham City, and the Dark Knight that will one day protect its streets, is hinted at, but not a focal point for this tale, and left teased for future films, perhaps. Joker charts the journey of Arthur from devoted son and aspiring comedian, to the criminal genius he is destined to become. Chillingly potrayed by Joaquin Phoenix, the film charts one man’s struggle with mental illness and his desire to find his place in the world as a comedian.

There is a stirling cast to back up Pheonix’s stellar, Oscar-winning performance, that includes Robert De Niro as Arthur’s idol, TV talk show host, Murray Franklin, and Zazie Beetz as single mother, Sophie Dummond, who lives in the same apartment block as Arthur. Marry that with the direction, writing and cinematography, and Joker grips you from the outset, playing with your emotions and filling you with a creeping sense of dread as to what will happen to Arthur, and how and when he will emerge as the villian he is destined to become.

Putting aside all thoughts towards who Arthur becomes, this film brilliantly portays one man’s struggle with his life and mind, filling you with uncomfortable sympathy for his suffering, despite the things he is capable of and does. As the city of Gotham drowns in violence and chaos, and this devoted son struggles to stay afloat, the journey he takes you upon is a hard watch, but at the same time, a piece of cinema that you are unable to tear yourself away from.

Another dark offering from 2019, refelcting, possibly, the times we have been through in 2020 – this time in the form of The Lighthouse, from Robbert Eggers (The Witch), and starring Willen Dafoe and Robert Pattinson.

It’s the 1890s, and this bizzare, trippy film begins with Thomas Howard (Robert Pattinson) arriving by boat to a remote New England island, that slips out of the fog like some foreboding monolith. As his only link to the life he left behind is dragged away by the storms, you already feel the sense of loneliness, isolation and remoteness of the place that will be his home for the next month and many weeks of hard, back-breaking labour.

But he is not alone. Thomas Wake is the Lighthouse keeper, a grizzled, snarling, old sea dog, brilliantly played by Willem Dafoe. Reclusive and troubled, the keeper is not glad of the company, and sets about tasking his younger colleague with afore mentioned hard labour. As storms batter the shard of rock that is their home, and the already claustraphobic feeling of the film closes in around their relationship, already troubled minds begin to crumble.

Of all the films I have watched during the Pandemic, this film, rather prophetically, is the most timely. Shot entirely in monochrome, the screen comes to life with differing shades of blacks and greys, spilt by forking whites of lightning. Candles flicker like dancing shadows, and the feeling of the coming storm, not just the one outside, builds slowly, rumbling its discontent as the wonderfully shot tale begins to unfold before you.

It won’t be for everyone. Both actors of this very limted cast film, chew up the screen with their performances and dialect. You can hear the salt drip from Dafoe’s lips everytime he snarls and rasps some drunken insult to his colleague. 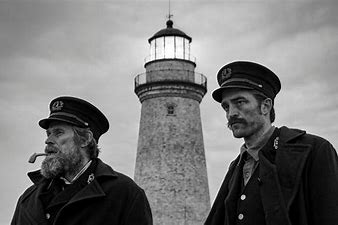 At times, it is guttural, and unable to hear his words, you are drawn to his body language and sheer dominance of his presence and preformance. Pattinson is equally a revelation, and together, these two actors haunt the shadows, their fractuous relationship splintering before you.

Quite often you will not be sure of the symbology on screen, the hidden portents and meaning in the tale unfolding, the downright weirdness of it all – but that is what is so brilliant about this tale.

I did not like the film as I watched it – I knew I should, but found I wasn’t enjoying it as much as I thought. It was only after the credits had rolled, and the days changed to weeks that it began to settle under my skin. Only then could I truly appreciate what an astounding, bizzare piece of cinema this is.

In a time of self-isolation, when everyone is struggling with their lives and facing personal hardships, this film is a timely look on the effects of loneliness and the fragile nature of the mind. It will (and has) divided opinions, no doubt, but many months after watching this film, I think about it a lot, and when I undoubtedly revisit it, I will watch it with much more of a depth of understaning to the hidden meanings unfolding on screen.

A film with so many layers, that allows you to make your own mind up about what you are seeing on screen, The Lighthouse is a tale for dark days, a wonderfully crafted, acted and written film, that won’t guide you to safety through the storm, but it might at least prepare you for it.

Join me next week as I revisit the TV programmes that kept me going through 2020.

In Review of… The Haunting of Bly Manor

In Review of… Fargo (Season 1)